Mirila, stone monuments to the departed, can be found along the mountain paths, passes, elevations and clearings of Mt. Velebit. Mirila date from the times of the Velebit hamlets (17th–20th centuries), that mainly survived from animal husbandry.

They preserve the memories of persons who died on the mountain slopes and had to be carried to the village church and then to the cemetery where they were buried. On such arduous journeys, it was only permitted to stop, rest and place the deceased on the ground in one place - the place where the deceased would greet the sun for the last time.

On this place was erected a mirilo, the resting place of the deceased. Flat stone tablets were generally laid at the head and foot of the deceased, marking his height, to be connected at a later date by a row of stone tablets. The headstones were also sometimes subsequently adorned with symbols carved in shallow relief. These mirila were venerated and visited more than graves, as it was believed that the grave only contained “the body without the soul, which remained at the mirilo.”

Mystical artistic markings on the headstones, among which the cross and solar circle were the most common, bear witness to a continuity of artistic adornment from prehistoric cultures, via early Christianity and the iconography of the stećak (medieval Bosnian standing tombstone), while inscriptions are rare and belong to more recent times. As the stone markers of a unique funeral cult, mirila convey the customs, way of life and creativity of an entire era. 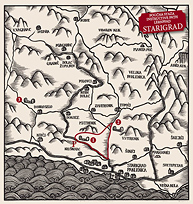 Artistic images of the Starigrad mirila (a resting spot for the body during the funeral procession from distant mountain villages to the grave - the mirila was built specifically for the deceased and once built, it was said that his mirila had been made; mirila = measure in the Dalmatian dialect), despite their rustic quality, the wealth of the raised engraving etched into the head stones is fascinating. At the first site along this trail, which can be reached from the road from the centre of Starigrad, is one of the rarely preserved headstones with an engraved anthropomorphic (human-like) symbol.

From here, the mountain trail leads to the site Opuvani dolac, offer a magnificent view over Starigrad along the route. It is the iconography of the mirila that makes them so distinctive, and here, it is possible to see many different symbols - from the simple motif of the cross (Latin, Greek, solar, anthropomorphic), often in combination with solar circles, to fully undefined symbols (rosettes, spirals, four-hooks), whose meaning is known only to the master who engraved them...

The return trip to Starigrad leads along a skilfully built trail down the steep slopes of Veliki Vitrenik. At the end of the trail, we recommend a visit to the small ethnography museum in the village of Marasovići to become better acquainted with the traditions, customs and culture of the Velebit region. 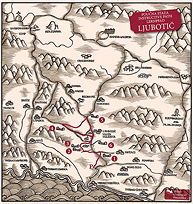 The path includes 6 localities with mirila in the immediate vicinity of the village of Ljubotić, the former hub of this part of Velebit, to which the population of all the surrounding hamlets gravitated. This is also the location of the local cemetery - the starting place for the processions that carried the deceased to burial. Each of these localities contributes to a part of the story of this unique custom through words and pictures. The largest preserved group of over 300 mirila is the so-called Vukićeva mirila (6), located along an old path that connected the hamlet of Bristovac with Ljubotić.

From the elevation on which the so-called Renjevačka mirila are located (5), there is a beautiful view of the entire Velebit Channel, all the way to the Zadar Archipelago.

On the return trip, there is an opportunity to rest at the village household of Vrata Velebita, visit an ethno-house and a permanent exhibit on the development of beekeeping in Dalmatia and the Mediterranean. With advance notice, it is also possible to savor domestic specialties.